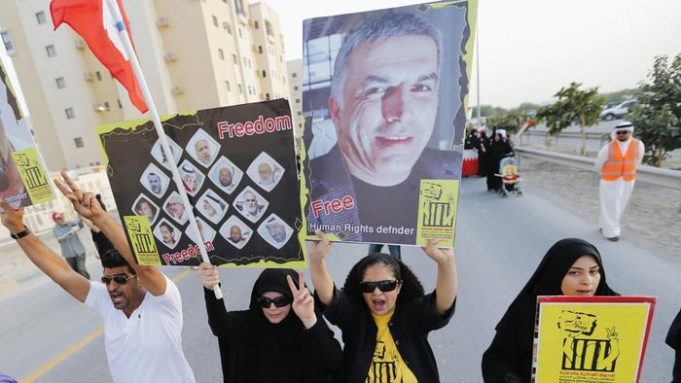 Nabeel Rajab, a local human rights activist and vocal critic of the Al Khalifa monarchy, has been sentenced to two years in prison on July 11. He was convicted “of disseminating false news, statements, and rumors about the internal situation of the kingdom that would undermine its prestige and status,” according to the official BNA news agency. The court sentenced Rajab without him being present. He has been hospitalized during his year-long pre-trial detention.

The Kingdom of Bahrain has been cracking down on pro-democracy and pro-equality reformers since the 2011 protests. These protests, organized by Rajab, started with the call for the weakening of the monarchy’s grasp on high-level government posts and a solution to Shia discrimination. The demonstrations were met with force as the government brought in soldiers and tanks from its neighboring Sunni Gulf states, killing 30 civilians and arresting 3,000. The monarchy’s heavy-handed response triggered a backlash. Protesters now call for the end to the Al Khalifa monarchy which stifles opposition and continues to sanction Shia discrimination, the Shia making up 70% of Bahrain’s population.

Despite popular demand, King Hamad bin Isa Al Khalifa has not only remained in power, but has clamped down on protests, political parties, and general dissidents that express their opinions in the press or even social media. This year, 103 citizenships have been revoked by the government under accusations of terrorism-related crimes. The trials through which these sentences are passed lack due process and transparency.

The monarchy has also pursued partisan avenues of change. In 2016, the government banned the Shia Muslim opposition group Al Wefaq which stood for the equal treatment of the Shia Muslim majority in a Sunni-dominated country. In May, the Bahraini court ordered the dissolution of the country’s last major opposition group the National Democratic Action Society, or Waad. Despite Waad’s political mobilization remaining peaceful, the Minister of Justice defended the Bahraini court saying that the attitude of the group violated a “respect for the rule of law.” The last straw came in February 2017 when Waad commemorated the sixth anniversary of the start of the 2011 protests. Waad described ongoing violations of human rights saying that the “constitutional political crisis continues.” By limiting the forums and organizations through which individuals may voice and act on their concerns, the monarchy has eliminated government-recognized institutions that might question its legitimacy.

International institutions have voiced their concerns regarding the treatment of political prisoners in Bahrain’s Jaw Prison. Ebtisam Al-Saegh, a prominent human rights defender in Bahrain, was arrested in May 2017. In Bahraini custody, she was beaten and sexually assaulted, according to Amnesty International. She was released but re-arrested on 3 July.  Nabeel Rajab, when re-arrested in 2016, spent the next nine months in solitary confinement until he was admitted to the hospital in early April. “Prolonged and indefinite solitary confinement violates the prohibition of torture and other ill-treatment,” according to Amnesty International. He had been rearrested for interviews in which he exposed human rights abuses and criticized the war in Yemen. Though Al-Saegh and Rajab are famous examples, as they are public faces actively organizing against the regime, many more have either been imprisoned, sometimes for life, or received death sentences.

It’s clear that Bahrain has no intention of ceasing its campaign against those who speak out against the government. With Donald Trump providing a $5 billion 19 Lockheed Martin F-16 aircraft and related equipment sale to Bahrain, the United States is actively turning a blind eye. It does not help either that Bahrain is home to the U.S. Navy’s 5th fleet. President Trump promised that the strains that had existed under the Obama administration will not exist in the new government. Bahrain has carte blanche, as far as American moral and equipment support, to smash any political opposition regardless of the violent extent the monarchy is willing to go.

Cholera and Dissipating Living Standards: The case of Yemeni Shia

No One Is Safe!