Iraq is currently facing a crisis that puts ethnic and religious groups under pressure of violence, torture, and discrimination.

A series of discussions held at Georgetown University on Threats to Religious and Ethnic Minorities under the Islamic State revealed the aspirations of affected groups and the duties and options for international and state actors.

While re-establishing proper and sustainable living conditions is a priority, how will these groups be governed in a future Iraq? How will the government and international community create a sustainable country and bring justice to those who have suffered?

In the State Department session held July 29, Antony Blinken, Deputy Secretary of State, stated, “Daesh has not only killed, they’ve sought to erase the identity of those that they’ve killed – to supplant centuries of culture and history with their own ideology of nihilism and murder. Church bells that had rung in Mosul for more than 1,600 years went silent. The Tomb of Jonah, in Mosul, was bombed. Shia shrines and mosques in Tal Afar were destroyed. In Dair Mar Elia, Saint Elijah’s Monastery, the oldest in Iraq, was reduced to rubble on the plains of Nineveh.”

He told his audience that all assistance must be extended to Iraq to help it get through the post-ISIS era and provide a safe and stable environment for its people. While many groups are focused on justice in a post-ISIS Iraq, there are also questions about how whether the country can remain as one or whether it will be divided, and how government would function in a divided Iraq.

The speakers at these discussions declared it a foreign policy priority to protect minorities in the ISIS region.

However, the minority groups stated that their living situations range from difficult to abysmal. Representatives from the Christian community stated that they are still “living in survival mode” with entire families living in one-room shelters. There is limited food for the Kurdish refugee camps, and aid seems to be decreasing. Recently a chemical attack affected 1,000 Turkmen. The Yazidi speaker revealed that 37,000 Yazidi women have been abducted, pushing for a case at the ICC. However, because neither Syria nor Iraq signed the Rome Statute, the foundation of the ICC, the court has no jurisdiction to handle the crimes ISIS committed in these countries.

There are other ways in which the ISIS case can be brought to the ICC. The ICC prosecutor could exercise personal jurisdiction over nationals of ICC member states, Iraq or Syria could accept the Court’s jurisdiction, the UN Security Council could refer the matter to the court, or governments could carry out national prosecutions. With personal jurisdiction, the ICC could exercise jurisdiction over ISIS fighters from ICC states who traveled to Iraq in Syria, such as fighters from Tunisia or European states. However, as most of the group’s leaders come from Iraq and Syria, the ICC lacks jurisdiction to prosecute those most guilty of war crimes.

Alternatively, the security council could take action by making a court referral. This effort previously was vetoed by China and Russia. The Rome Statute brings forth investigation of alleged war crimes, crimes against humanity and genocide; the current ICC prosecutor wishes to work with states to go forth with domestic investigations. Iraqi minorities and persecuted groups are demanding that the country to take action, if not by ratification then by alternative means. The next step the international community can make, as recommended by the panelists, is to have the United Nations declared the situation as genocide, as only the United States and EU have done thus far.

The loss of political will, infrastructure, and job opportunity are all worrisome issues. Thoughts of safety and proper living circumstances are the first concern for these oppressed groups. However, nearly all the speakers came to the consensus that a future Iraq requires justice and a better government that will provide some sense of autonomy or independent states.

Unfortunately, Article 140 of the Iraqi constitution requires that a referendum of the inhabitants living in the disputed territories, which include Kirkuk, Nineveh Plain, Sinjar and other regions, determine the future of the lands and the minorities. The referendum was scheduled to be held before Dec. 31, 2007, but amid security concerns and increasing demographic changes, it has still not occurred. Creating a stronger constitution that protects and incorporates all groups is a must for a better future and a responsibility of the state.

The immediate need to bring ISIS leaders to justice requires a new UN convention against terrorism and a revision of the ICC’s statute to cover terrorist acts. These changes could allow the international community to bring charges against ISIS leaders and help move Iraq to a more positive reality. 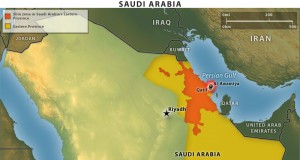