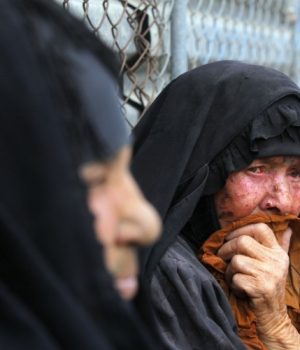 The ongoing conflict in Iraq and Syria has resulted in the persecution of Yazidi, Turkmen, Assyrian, Kakai, Shia and Sunni alike. ISIS bodes not only a threat to international security, but to the lasting heritage of these groups which have been settled in the levant for generations. These concerns of cultural preservation and group hostilities in a future government were discussed at large during a series of discussions held at Georgetown University titled “Threats to Religious and Ethnic Minorities Under ISIS”.

However, the panelists in the Thursday discussion did not feature a Shia representative despite moderators openly saying they are being persecuted. Is this because of the Shia militias in Iraq? While there are conflicts, one cannot deny that Shia are direct victims of ISIS. While the Shia are not a minority in Iraq, Shia Rights Watch’s records shows shia deaths occur every day as a result of ISIS and other terrorist attacks in addition to other hate crimes. As other groups want justice in a post ISIS Iraq, it is also worrisome about how the future government will function with increasing desires for a more segregated and divided Iraq. In fact, tensions were shown in a variety of comments made by different representatives toward majority groups that are also being persecuted. How can a future Iraq be a ethnically and religiously pluralist nation after such horrors?

Although Shia militias manage to fight along Sunni in the process of retaking captured cities, anti-Shia attitudes still fuel the conflict. Christian representative, Father Benoka, stated that the Christian community does not want to be under Muslim custody, later elaborating that the Christians must first reestablish their own state first before becoming integrated once more.
Another Iraqi minority official, Kemal Kirkuki, the Peshmerga commander for Kirkuk has also stated similar a opinion in an interview with Al-Jazeera stating that “We are not brothers” . At this point, many believe the sectarian divides in Iraq have become too entrenched for the country to find unity, noting any future will necessarily entail separate states for the Christians, Kurds, Sunnis, and Shia.

A prevailing question concerning of the Iraq crisis is whether sectarian cleavages will continue to sharpen in Iraq and surrounding territories. Many actors are actively promoting a Sunni vs. Shia vs. Kurd scenario, while others are urging Iraqis to unify and address the country’s existential threat. Only with a unified front will Iraqis be able to protect its citizens from the expansion and consolidation of the “Islamic State” as the human consequence of the Iraq crisis is staggering and it continues to worsen. Food insecurity, sexual violence, and ethnic and religious based violence are on the rise. There are over 1.2 million displaced people and humanitarian aid cannot reach all of those affected due to ongoing security constraints. It remains to be seen whether domestic and international efforts will play a stronger role in addressing the dire humanitarian situation in Iraq.

Shia Rights Watch urges for different minority groups to seek reform and justice together, regardless of whether or not Iraq becomes a federalist country in the future. Iraq is a mosaic pieced together from its diversity and will never be able to effectively governed if there are oppressed groups that aren’t getting the basic rights and representation to which they are entitled. While Iraq is currently in crisis, currently integrated communities of refugees are demonstrating that in desperate times, the country must unite for its people.