On Thursday night, July 7th 2016, a Shia shrine was attacked by suicide bombers and gunmen, killing 26 and wounding 52.

Prior to that terrorist groups on July 3rd, detonated a truck bomb taking the lives of 292, making it the deadliest attack in Iraq since the U.S. led invasion. These attacks were carried out in populated areas, filled with people preparing for the holiday of Eid. This has been one of the bloodiest Eid’s in history, with more than 350 dead in 8 different countries. Muslims around the world are trying to come to terms with the violence triggered by ISIS, especially during this holy time.
While ISIS has lost Fallujah and might soon lose Mosul, it is demonstrating to the world that they still have an iron tight grip on the population of Baghdad. ISIS is showing the world that they can attack anytime, and anywhere, with no advance warning. They showed this also in Paris and Brussels, but now they are turning closer to home, as they continue to lose ground on the home front. They have also shown that no location or time is sacred to them, or will be spared from their wrath.
ISIS has two powerful (or not so powerful) forces enabling it to spread its hatred throughout the world so effectively. The first is its use of social media and the internet to radicalize its followers throughout the world. As has been shown as recently as the tragedy in Orlando, all ISIS had to do was make convincing radicalization videos to target isolated and rebellious young people, post them on the internet, then simply sit back and wait. Their ideology has taken hold so powerfully on so many people’s minds that these individuals themselves are becoming radicalized behind their own computer screens, then taking the violence into their own streets. Then ISIS, thousands of miles away, takes credit and adds more bodies to their body count as their name spreads through the global media, riding the waves of fear and insecurity.
The second reason ISIS has been able to gain so much power so quickly is that the Iraqi government has so little ability to protect. One example of this is their so-called bomb detecting wands used at security check points, which have been proven to be fake. Yet the government continues to use them, as trucks filled with explosives roll right past the check points and into populated areas. With no strong leadership, no powerful government, and no effective police force or security system, ISIS has waltzed right into the country and has gobbled up the power that should rightfully belong to the government like a wolf devouring its prey. The organization is growing because people fear them, and that fear is spreading like wildfire with every new body that gets added to the death toll.
To stop ISIS’s reign of terror, the world needs to come together and address those two crucial issues. We must shut down sites that promote the radicalizing propaganda across the world, and target the components of ISIS itself who create the appealing and enticing propaganda. Simultaneously, we must help Iraq develop a strong security force, whether that be through investing in new technology, training soldiers, aiding leaders; whatever it takes. The government must also take care to protect its civilian populations while it wages a war against a terrorist group, or else the civilians will turn against the government who is not able to provide for them and turn towards the terrorist who say they will protect them. This war needs to be carefully planned and strategic, but we must begin to act now, because every minute we sit on our hands and hide behind bureaucratic tape, more people are sitting behind their computer screens and watching videos that plant the seeds which lead to events like Orlando. 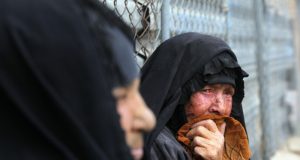 The Future of Iraq: Should Minorities Govern Their Areas?