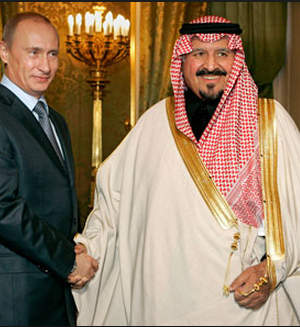 These bilateral agreements are interesting for many important reasons. The Russian Federation and the Kingdom of Saudi Arabia have a long sordid history of frigid diplomatic relations and in a 2011 journal article, Russian Ambassador to Saudi Arabia, Oleg Ozerov, outlined the tenuous history the two countries have shared. Despite the fact that the Soviet Union was the first nation to internationally recognize Saudi Arabia’s independence in 1926, relations were completely cut off in 1938 after Saudi Arabia’s refusal to recognize or receive any Russian diplomatic representatives in their Kingdom (Ozerov, 2011). Ties between the two countries remained severed for many decades until the 1990s when they resumed with the hesitant exchange of Ambassadors (Ozerov, 2011). The new millennium ushered in a new wave of international affairs and issues which forced relations again as new petroleum deals were signed and official state visits resumed (Ozerov, 2011).

Despite the relationship that has been reestablished between the two countries in the past twenty years, we are hesitant to rely on the connection as a lasting one it as a lasting friendship. Just three months ago the Saudi Arabian Minister of Foreign Affairs accused President Putin of hypocrisy after the Russian President made unsettling remarks about Arab nations’ right to settle regional disputes without the influence and involvement of foreign powers (Taylor, 2015). Putin’s unyielding support for the Assad regime in Syria put even greater strains on the Saudi-Russian relationship, despite some common interests in the petroleum sector (Taylor, 2015). While the relationship established in the agreements signed last week appears to have very little historical precedence, there are other factors which exacerbate their unexpectedness.

When examining prevalent geopolitical issues within and between the nations are taken into consideration, it remains difficult to pinpoint the catalyst which sparked the sudden agreements. It is no secret that Saudi Arabia has a friendly relationship with the United States, and that the United States does not have a friendly relationship with Russia. Moreover, both Saudi Arabia and the United States have stood firmly in opposition to Iran, while Russia, since the Iranian Revolution of 1979, has teetered between support for Iran through the resistance of international sanctions and resistance for Iran through support for Security Council Resolutions 1696 and 1835, both of which intended to limit Iran’s nuclear capabilities. (Omelicheva 2012) More recently, under Putin’s leadership, after news of a possible agreement between the US and Iran on the topic of nuclear disarmament broke, Russia sent numerous S-300 surface-to-air missiles to Tehran (Demirjian 2015). All of these factors considered, we are left asking the same question commonly asked of Putin’s recent foreign policy decisions: what gives?

What is left is the realist’s argument of national interest. With the US leading the G5+1 on nuclear discussions with Iran, teaming up with Saudi Arabia could be Russia’s way of attempting to restore the balance of power by ensuring that the United States does not gain too much influence. The same reason that Russia continues to trade with Iran despite Security Council supported and enforced sanctions could also be behind their new desire to work with Saudi Arabia: it generates profit for Russia. Finally, it has been no secret that President Putin has been pushing the bounds of his international power with the annexation of Crimea and the extension of his sphere of influence back into former Soviet Union states. Perhaps Putin is seeking to reestablish a greater sphere of influence in the Middle East by balancing trade with Iran and deals with Saudi Arabia.

What this does mean is that there will now be one more nuclear state in the already unstable, conflicted Middle East. The international community right now does not know Russia or Saudi Arabia’s intentions with these agreements other than Saudi Arabia’s desire to produce nuclear energy. Samantha Power, the US Ambassador to the United Nations, stated in testimony to the Committee on Foreign Affairs that any nuclear deal with Iran needs to be predicated on “facts, not faith. On proof, not goodwill” (Power 2015). The same must also be true dealing with Saudi Arabia in the future. The international diplomatic community cannot put blind faith into Saudi Arabia, or Russia, that their nuclear power will only be used for peaceful purposes. Russia now has the opportunity to leverage their role as a global power in negotiations with Saudi Arabia to influence what is happening in the Middle East, either for the better or for the worse.

Omelicheva, Mariya Y. “Russia Foreign Policy Towards Iran: A Critical Geopolitics Perspective.” Journal of Balkan and Near Eastern Studies 14, no. 3 (2012): 331-344.