On December 11, 2012, the U.S. formally designated Jabhat al-Nusra as a foreign terrorist organization. Turkey argued that Jabhat al-Nusra is fighting with moderate rebels and that banning the group would radicalize it. Turkey’s former Deputy Prime Minister Abdullatif Sener criticized the Erdogan government’s meddling in Syria, claiming the administration provided Jabhat al-Nusra with a large volume of heavy weapons. On June 3, 2014, Turkey blacklisted Jabhat al-Nusra as a terror organization. ­Pinar Tremblay of The Globe Times states, “As soon as Nusra’s terrorism designation was heard, a swarm of tweets started flowing with the hashtag #HepimizNusretCephesiyiz (We are al Nusra Front) in Turkish…It is noteworthy that executive editor of al Nusra’s Turkish newspaper has sent several tweets emphasizing how much Turkey owes its national security to Al Nusra.” In October 2014, Vice President Biden apologized to Erdogan. The White House “issued a statement saying that Biden did not intend to imply that Turkey ‘intentionally’ facilitated terrorists.”[1] Biden’s additional reference to a “proxy Sunni-Shia war” sheds light on al-Qaeda’s role in an increasingly rigid sectarian conflict.

In November 2014, Jabhat al-Nusra was added as a target for U.S.-led coalition airstrikes in Syria. Moderate rebels expressed dismay at the decision to list Jabhat al-Nusra as a target. Al-Monitor states, “Syria, including the Free Syrian Army, believe that Jabhat al-Nusra never killed people, and its terrorism was against the regime.” State Department spokeswoman Victoria Nuland states, “[Jabhat al-Nusra] has sought to portray itself as part of the legitimate Syrian opposition while it is, in fact, an attempt by AQI to hijack the struggles of the Syrian people for its own malign purpose.” Most of Jabhat al-Nusra’s fighters are Syrian, but owe their allegiance to al-Qaeda rather than a Syrian nation. The Guardian states, “Syria’s main opposition group, the Free Syrian Army (FSA), is losing fighters and capabilities to Jabhat al-Nusra, an Islamist organization with links to al-Qaeda that is emerging as the best-equipped, financed, and motivated force fighting Bashar al-Assad’s regime.”[2]

Jabhat al-Nusra’s origins are troubling. In late 2011, al-Qaeda in Iraq (AQI) emir Abu Bakr al-Baghdadi sent Abu Muhammad al-Joulani to Syria. Al-Julani organized cells that formed around the al-Qaeda ‘alias’ Jabhat al-Nusra. In 2013, al-Baghdadi announced the creation of the Islamic State in Iraq and al-Sham (ISIS) from the merger of Jabhat al-Nusra and AQI. Al-Qaeda leader Ayman al-Zawahiri announced “the annulment of the annexation of Syria (or al-Sham) to the Islamic State of Iraq…and [declared] that Jabhat al-Nusra will remain in Syria as al-Qaeda’s only arm there.”[3] Zawahiri “said Baghdadi was ‘wrong’ to declare the merger without consulting or even alerting al-Qaeda’s leadership. He added that Syria was the ‘spatial state’ for al-Nusra, headed by Abu Mohammad al-Joulani, while Baghdadi’s rule would be limited to Iraq.”[4] In 2014, ISIS fought Jabhat al-Nusra in eastern Syria, condemning the group’s “campaign of betrayal and treason.”[5]

Tensions between al-Qaeda and ISIS stood to benefit the U.S. Iraq-first strategy. Yet, in September 2014, The Guardian reported on war planning meetings between leaders from Jabhat al-Nusra and ISIS, which provided the group with weapons and supplies at the beginning of the war. This complicates Jabhat al-Nusra’s relationship with the Syrian population and other rebel groups. Despite backlash against their sharia courts, Jabhat al-Nusra “has avoided tactics like brutal executions and sectarian attacks that made AQI unpopular.”[6] Executions, with the criminal abuse of the population, limit a base of support for ISIS in Syria. Jabhat al-Nusra provides security and controls food distribution and electricity. Jabhat al-Nusra benefits from overseas funding and large percentage of al-Qaeda central command’s budget, this allowing for a dependency relationship with the population it controls. Since October 2014, Jabhat al-Nusra has defeated factions affiliated with the Syrian Revolutionaries Front, a key recipient of U.S. weaponry. The Telegraph states, “The collapse of the SRF and attacks on Harakat Hazm have dramatically weakened the presence of moderate rebel fighting groups in Syria, which, after almost four years of conflict is increasingly becoming a battle ground between the Syrian regime and jihadist organizations.”[7]

With less space for moderate rebels fighting for a nonsectarian democracy, the radicalized alliance between Jabhat al-Nusra and ISIS better enables Biden’s reference to a “proxy Sunni-Shia war.” The language describing the conflict has been polarizing. In 2002, a Libyan newspaper pointed to a Shia “axis of resistance” and, in 2004, King Abdullah of Jordan referred to a Shia Crescent. Al-Monitor described a “Sunni Axis” against Syria, comprising of Turkey, Egypt, Saudi Arabia, and Qatar; or of those states dumping money and weapons on groups fighting Assad for a diverse set of regional interests.[8] The meddling of outside powers has proved divisive among the rebels. However, increased cooperation between Jabhat al-Nusra (al-Qaeda) and ISIS could better enable the joint targeting of jihadist elements. Targeting of Jabhat al-Nusra fighters represents a major challenge for the U.S.-led coalition, due to the group’s blending with other rebel groups such as the Islamic Front. Overall, outside support for groups like Jabhat al-Nusra lends to the brutal sectarianism advanced by ISIS and al-Qaeda and makes reconciliation between the Sunni and Shia populations, a requirement for a post-Assad non-sectarian democracy, more and more difficult. 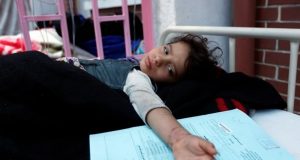 Cholera and Dissipating Living Standards: The case of Yemeni Shia