Today, February 9th, 2015, history is being made. Alabama, one of the oldest states known for executing grave human rights abuses, has legalized same-sex marriage, as the Supreme Court deemed Alabama’s hold on legalizing same-gender marriage to be unconstitutional (Huff Post). Alabama is the 37th state to join the movement, up 25 since the initial wave of legalization erupted within the heir of supreme justices in 2013 (Huff Post). In fact, this decision is so colossal that not only are many human rights groups rejoicing, but also encouraging same-sex couples within the last 13 states to start their wedding planning (Huff Post) as many predict an influx of legalization nationwide per 2016.

So what does this mean for our nation? Well, it means we are making a lot more progress than many skeptics have anticipated. It also means that we are light-years closer to closing the gaps of inequality that forever loom like the fog on a rainy day. It means that we are gradually inching closer to ending hunger and solving global poverty. It means that we are now in a better position, and for that matter, a less hypocritical one, to lend a helping hand to developing nations, in as much as maybe we will help solve their crises rather than wreck their worlds as we did in the Iraq war. And lastly, it means that members of the U.S., citizens like you and I, who merely desire to live fulfilling lives, fall in love, and maybe find some sort of meaning to this dreary world, can now do so with the certificate that every American citizen, and really global citizen, should be able to receive if they so choose, regardless of their sex, color or gender: A Marriage License.

In the last century, we have overcome many thus mountains and rivers that a majority rule predicted that we never would. We have addressed racial segregation and gender inequality, though we still have work to do. And now, my friends, I am proud to say that it is finally time that we conquer the latter wave of sexual equality. It is time that we can finally adhere to the day that we can all be laughing about the fact that people’s opinions once held so strong that they were able to rebuff another individual’s inherent human rights. In fact, I look forward to the day, one that is hopefully sooner than later, in which we are able to look back at this childish squabble, the way we do when looking back at the ignorance that occurred before the civil rights movement, and laugh, shaking our heads in dismay.

I can only imagine that Martin Luther King Jr. is looking down at us smiling at the progress we have made as a nation. And thus, it is for that reason that I smile in return as I gleefully live through this glorious moment in history. For something that once was condemned among my friends when I was in middle school (not that long ago) can now be flaunted with joy, as love is an inherent human right that no one can take away from you.  As article #16 states within the UDHR: “Men and women of full age, without any limitation due to race, nationality or religion, have the right to marry and to found a family. They are entitled to equal rights as to marriage, during marriage and at its dissolution” (United Nations). May freedom forever reign and the Supreme Court soon declare that it is unconstitutional for any state to refuse a right so precious to any off of mere sexuality, as they once did with gender and color. 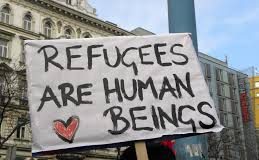 Come on America, We are Better Than This!