January 21, 2015, The conflict in Yemen has once again taken the stage on the news outlets, after the recent advancements of Shia rebels, known as Houthis and their taking over the capital Sana’a in September. Their rise has challenged not only President Abed Rabbo Mansour Hadi, but also the West, and the Gulf states as well. The Houthi rebellion has started in 2004 to counter the rise of Saudi Wahhabism, a sect that considers Shia as heretics and promotes the political and financial status of the poor and underdeveloped northern region of Yemen.

While the clashes between Houthi rebels and pro-government forces has long been limited to North and North Western areas, where large amounts of Shia Houthis reside; since the recent capture of Sanaa, the Houthis’ consolidation of power and expansion has veered towards southern Yemen. The religious discrimination in the Yemeni government’s practices, and incompetence in governments that have taken the office so far in handling tribal nepotism and political and financial corruption, have made other Yemenis side with the Houthis. This is not due to their military power or alleged support from Iran, but due to “the effectiveness of the Houthis, at least thus far”, and “the incompetence of America’s partners in Yemen” according to Charles Schmitz, a Yemen specialist at the Middle East Institute. Contrary to the governments that have previously taken office in Sana’a, the organization of Houthis and their effective leadership is not only attractive to Shias, but also to people of the other sects; mainly in the Southern regions of Yemen, where Houthis do not have much of a presence. The clashes between Houthis and pro-government forces in Yemen have a clear winner, Al-Qaeda in the Arabian Peninsula (AQAP).

AQAP, which is active in Yemen and Saudi Arabia, is currently the most dangerous branch of the terrorist group on the globe, due to its focus on attacking Western aviation, according to two U.S. officials who spoke with the Associated Press writers on the condition of anonymity (1). AQAP is believed to be co-operating with the Khorasan Group in Syria on building bombs that are difficult to be detected and can be carried to airplanes in electronic devices. In Yemen, AQAP has conducted suicide bombings that have targeted not only Houthis and civilians, but pro-government forces as well.

With an already urgent threat rising from AQAP, it seems that a more active role is necessary to be taken by the U.S. and the West. This would require a dynamic foreign policy that is committed to change the status quote. The situation has become more complex, as according to reports, ISIS has entered Yemen and some clashes between them and AQAP took place in rivalry to recruit more terrorists to attack targets across the globe. Needless to say, the drone campaigns against Al-Qaida are tactics to encounter terrorist activities in Yemen, but by no means is it a long term strategy.

A change in U.S. policy may be required, a change that may involve more detachment from allies who have tied up the liveliness of U.S. foreign policy to their traditional Iran-phobic tactics. This has not solved any problems, but has only escalated them. The U.S. has often shouldered the entire weight of its allies, who have always been dependent on the U.S. on many issues. Current situations in Syria and Yemen are instances of such conflicts of U.S. interests to counter terrorism and promote security and stability vs. building an umbrella to funnel support for any group, though vicious, and unreliable, just to counter Iranian influence, another sub-optimal decision by some allies. It seems that opening a channel with the Houthis and effectively communicating the importance of forming an inclusive government that protects Yemen’s national interest and fights al-Qaeda, ISIS or any Salafi terrorist group is no longer a matter to be overlooked and ignored. No matter how Gulf States show resistance to such dialogue, there seems to be no other effective way to fill in the vacuum of power in Yemen, especially after the recent resignation of the President Hadi.

It seems necessary to support accelerating the formation of an inclusive unity government that crosses the sect boundaries, and implements the power sharing deal. The faster the deal is implemented, the more effectively the U.S. can deal with the threat from Al-Qaeda by implementing a long term strategy to train the Yemeni military to take on AQAP. Moreover, a federalized system should be proposed and agreed to by all Yemenis that do not draw on the sectarian faults, fights poverty in all regions, and have not left any ungoverned vacuum space to be filled by Al-Qaeda, ISIS and other terrorist groups. The U.S., the GCC and Iran should converge on the importance of countering al-Qaeda and ISIS and to support the unity government instead of worsening the sectarianism in Yemen. 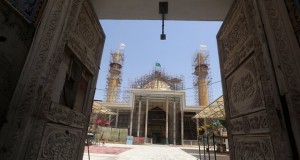 Three killed in three explosions in Iraqi city of Samarra