The third instillation of Shia Rights Watch’s monthly reports was released on April 1st and it detailed much of the repression that Shia Muslims face which receives scant media attention. The seven-page report documents violent actions taken against Shia Muslims in 13 countries through bombings, beatings, abductions, etc.

The opening section of the report states that 560 Shia have been killed and 550 injured. While the number of injuries has declined from the 700 documented in February, the number of deaths increased from the 350 last month. The increase in deaths was largely attributed to the bombings of Shia mosques in Sana’a, Yemen which killed 167 and injured 400. This attack which a group associated with ISIS has taken responsibility for was noted by the report as the first documented incident of anti-Shia violence in the country this year. 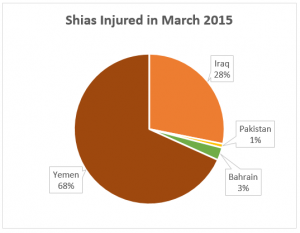 Iraq has been a constant source of anti-Shiism, the report notes, as each month of this year this country has the most deaths. Bombings in Shia-majority neighborhoods are almost a daily occurrence in the country. In March, Iraq accounted for 67% of the deaths which was 376 people. This is 200 more than the second highest country, which is Yemen. The report goes further to state that the reason for the upward trend of deaths in the country is the advantage that coalition forces have gained over ISIS in recent weeks. Terror tactics such s bombings, especially in Shia neighborhoods, could be a last ditch effort to maintain relevance while losing ground militarily.

Azerbaijan, India, Bangladesh, Morocco, the United Arab Emirates, Indonesia, and Lebanon were countries that have reported their first incidents of anti-Shiism in 2015. In India, the municipal government of Lucknow has denied Shia the right to erect billboards on a stretch of road between two imambaras. Also in Indonesia, anti-Shia banners were erected stating “Shiites are infidels”.

While events in Yemen and Iraq demonstrate the rapidly deteriorating security situation for Shia around the world, what is happening in India and Indonesia demonstrate how anti-Shiism materializes and can harm Shia without explicit violence. All of these incidents, both violent and non-violent, expose systematic discrimination in the societies in which they take place. In Pakistan, Shia communities are not afforded the protection of security services from attacks by militants or allowed to access those services to investigate these crimes. In India, Shia communities face restrictions on their religious freedoms as they are not able to erect banners to commemorate religious events. The report and the data that comes with it are effective in providing an overview of anti-Shiism around the world which not only summarizes events but gives a deeper look at discrimination.

Take a look at the report here.