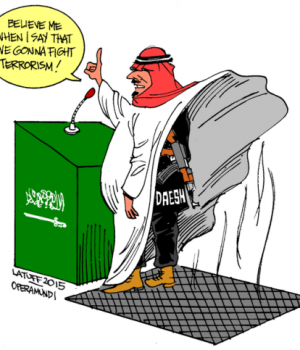 4/13/2016- On September 11, 2001 disaster struck at 9 am when hijacked planes crashed into the twin towers of New York City and the Pentagon of Washington, D.C. Immediately following the war, former President Bush declared a war on terror which is still going on to this day. In order to show just how serious he was about this initiative to end terrorism, he sent American troops over to Iraq and Afghanistan as a response. However, it was later discovered that Iraq was not responsible for 9/11 and that the US government started a war there under false pretenses (more information on this can be found via other sources). Further research has led the US government to declare that the atrocities committed on September 11th 2001 were the full responsibility of terrorist group, Al Qaida.  Human rights NGOs such as the Human Rights Watch, Shia Rights Watch, and Amnesty International have been arguing that Saudi Arabia actually played a role in the attacks, but the question is, how big of a role did they play and if so, why is the American government covering it up?

Not long after the attacks, it was discovered that most of the 9/11 hijackers came from Saudi Arabia.  Numerous statements have been made which hint to Saudi Arabia’s huge involvement with plotting out as well as implementing the attacks. One such statement was how prominent Saudi couple Abdula Ziz and Anoud Al-Hiji , left their Florida mansion just two weeks before the terrorist attacks. The FBI agent who was keeping tabs on them at the request of their neighbors who were suspicious of their spontaneous move (no forwarding address was given and no valuable items were taken), found that the couple had numerous connections to the 9/11 hijackers and that a member of the family even trained at the same flight school as them. In another statement, Zacarias Moussaoui, a convicted 9/11 co-conspirator, made claims that members of the Saudi Royal family helped finance  Al Qaida in the years leading up to September 11, 2001.  According to Zacarias he worked on the donor database for Al Qaida and distinctly remembers it including Prince Turki al-Faisal (former Saudi intelligence chief), Prince Banda Bin Sultan (former Saudi ambassador to the US), Prince al-Waleed Bin Talal (a prominent billionare investor) as well as many of the country’s leading clerics.  However, both of these statements on Saudi Arabia’s involvement in the terrorist attacks were negated by both the American and Saudi governments. The FBI agent who investigated the Florida case later claimed that his original claims were unfounded and completely speculation, and the lawyer of the co-conspirator called him mentally incompetent and noted that his claims have no ground in reality. In the US government’s mission to hide the truth, the official 9/11 Commission’s 28 pages describing the events of that day are still being kept as classified information in the name of national security. Both Democrat and Republican political leaders have spoken out on getting the information declassified, but both the Bush and the Obama administration is set against it, but for what reason?

For years, the United States and Saudi Arabia have been aligned despite the fact that Saudi Arabia has been known to commit more human rights violations and fund more terrorism than any other nation. How can the United States honestly fight terrorism while simultaneously be providing one of the world’s largest terror powerhouses with large amounts of money? My answer is simple, they cannot. Based on my research I have reached the conclusion that the war on terrorism has little to do with ending terrorism and instead has to do with the US government covering their own tracks. Due to their alliance with Saudi Arabia, the USA must have felt desperate to show the American people as well as the world that they are doing everything they can to fight terrorism, and so the war on terrorism was started to prove this point. However, terrorism has actually increased as a direct result, making it difficult to believe that fighting terrorism is the war’s main objective. Once you combine the US’s continued support for Saudi Arabia, the increasing terrorism rates, and the government’s refusal to release the official pages, what you get is not a government committed to the safety of the American people, but a government obsessed only with their own self-image. The USA cares more about looking and being portrayed as this great democratic hero, than about actually being that hero. So, there you have it, the war on terrorism is actually a campaign to cover up the truth on the September 11th attacks, while simultaneously trying to make the USA look like the hero.  If the US government believes this to be false, prove me wrong, release the papers, I dare you. 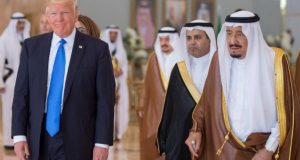