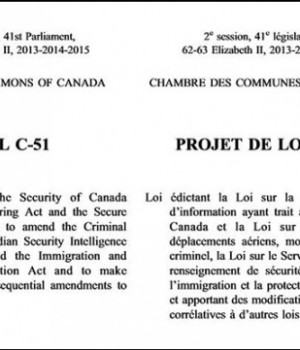 In early September 2014, Abu Muhammad al-Adnani, the spokesperson for the Islamic State of Iraq and Al-Sham (ISIS) called upon members to attack Canadians, stating, “Kill [the disbeliever] in any manner or way however it may be….Kill the disbeliever whether he is civilian or military.” This marked the first time there has been a call to specifically target Canadians at home. In the following month there were two attacks. The first occurred in Quebec as apparent jihadists in a car ran down two RCMP officers. The second one occurring in Ottawa as a lone gunman shot and killed a Canadian soldier before entering the Parliament building and opening fire where lawmakers were in caucus sessions (Fantz, Levs, and Shoichet, 2014). These events shocked and terrified Canadians because it proved that they were not immune to attacks at home. Everyone eagerly waited to see how the government would address the issues.

Unlike the American system that is designed on the premise of checks and balances, ensuring that no one branch of government has too much power, the Canadian parliamentary system allows the ruling party greater freedom. The prime minister, as the head of government, and his cabinet ministers each have seats and votes in Parliament. They introduce and defend bills and, if they have a majority, are able to pass through their agenda items with relative ease (Forsey). This is why, despite great pushback from opposition parties, the general population, and international groups, the Conservative Party was able to introduce and pass Bill C-51: The Anti-terrorism Act, 2015.

As outlined in an open letter to Parliament signed by over 100 Canadian lawyers and published in the National Post, there are numerous grounds on which people opposed the bill. The information-sharing statute in the bill increases the scope of security intelligence without including protection for citizens, making monitoring and dealing with the abuse of these new powers almost impossible. The second issue addressed in the letter is the fact that the bill makes it illegal to advocate for terrorism in general. Given that direct encouragement of terrorist activity is already illegal in Canada, this portion of the bill further represses freedom of speech and inhibits the efforts of current de-radicalization programs that work with people who show initial signs of violent extremism.

Another concern is that the bill allows for expanded authority of the Canadian Security Intelligence Service (CSIS) and reverses the changes that were made to CSIS and the RCMP in the 1970s that mandated a clear separation of powers. The new powers allotted to CSIS in Bill C-51 have disturbing consequences in terms of the potential for numerous contraventions of the Canadian Charter of Rights and Freedoms including those that protect individual’s privacy, dignity, and liberty. The lawyers also outlined what is missing from Bill C-51: accountability, oversight, the inclusion of proven anti-terrorists and de-radicalization policies, and restorative and rehabilitative measures rather than simply punitive measures.

Citizens are also worried about how the bill will affect their day-to-day lives. The bill broadens the definition of security to include issues of economic and financial stability, not simply public safety. This means that opposition to and protests against the oil sands and pipelines in Alberta, or opposition to certain federal trade deals, or support for green initiatives or Quebec separation could all be seen a threat to security. The bill also gives the government discretionary power to decide what they consider to be threats to security, meaning that threat may now be defined by political aims.

The New Democratic Party (Canada’s official opposition), and the Green Party opposed the bill in Parliament and the Liberals opposed the bill when it appeared in the Senate. International groups such as Amnesty International and Greenpeace have criticized the bill and celebrities including Margaret Atwood and Sarah Hammar have publicly criticized the legislation. Not including those who signed various petitions against the bill, 243,270 Canadians spoke in various ways against it throughout the process (Dinshaw, 2015).

To be clear, nobody who opposes the bill is “pro-terrorism” or “anti-protecting-the-people.” Most of those weighing in on the topic simply believe that Bill C-51 was rushed legislation that could be amended to better protect Canadians. But despite immense controversy, the bill passed all three readings in Parliament and then again in a 44-28 vote in the Senate. For citizens this means that some may see a restriction of their civil liberties depending on how government agencies decide to interpret and implement the new law. But what does it mean for the government itself? The end of October marks the next federal election in Canada and people have already been weighing in on the effect this bill will have on election results.

According to almost all reputable research organizations, in the time between when the bill was introduced and when it was passed, the main opponent of Bill C-51, the NDP, experienced an increase in support, while both the Conservative and the Liberal parties have faced a decrease in popularity (Elections Almanac, 2015). Support for Liberal leader Justin Trudeau dropped quickly after he came out in support of the bill, but a dramatic surge in support for the NDP did not occur until the Provincial NDP won the Alberta election in May. Some critical commentators are even labeling the Conservative government’s recent delivery of $3 billion to Canadian parents in the Universal Child Care Benefit a ploy to win back support in light of the recent drop in public opinion.

However, as almost every election in history has taught us, drawing election conclusions based on poll results is a fool’s errand. Just because there is a correlation between the timing of the bill and the change in poll results does not mean that the bill was the sole cause of the change.

Will voters remember Bill C-51 during the election in October? Probably.

Will Prime Minister Harper have to answer questions about his security policies during the election? If he decides to participate in debates, yes.

Will this be a deciding factor for voters when they cast their ballots? For some, maybe; for others, probably not.

Terrorism and security are very serious issues that Canada and the international community are facing, but they are also buzzwords come election time. There are many Hobbesian Canadians willing to sacrifice some personal liberties in exchange for security. There are many Canadians terrified at the prospect of Canada being a target by ISIS, and there are many Canadians who support Prime Minister Harper and Bill C-51. Just because this constituency was not as loud and vocal during the Bill C-51 debate does not mean that they do not exist and that they are not voting. As the Alberta election proved, anything can happen in an election and Canadians are just going to have to wait and see what October brings (other than snow).

Bell, Stewart. “ISIS Urges Jihadists to Attack Canadians: ‘You Will Not Feel Safe in Your Bedrooms.’” National Post. 21 September 2014. http://news.nationalpost.com/news/world/isis-urges-jihadists-to-attack-canadians-you-will-not-feel-secure-in-your-bedrooms

Forsey, Eugene A. “Canadian and American Government.” In How Canadians Govern Themselves. March 2012. The Parliament of Canada: The Library of Parliament. http://www.parl.gc.ca/About/Parliament/ SenatorEugeneForsey/book/chapter_4-e.html