Throughout human history the institution of war has managed to withstand the test of time and remain a prominent force in the world. Centuries ago, war was fought by tribal warriors using swords, shields and arrows. Today war is fought by professionally trained state soldiers and non-state actors using state of the art weaponry such as guns, jets, and bombs. Technology has amplified the level of destruction, opening the door for an increase in deaths, casualties, collateral damage, and Post-Traumatic Stress Disorder. War is costly, both in terms of monetary costs and in terms of the physical and psychological costs to soldiers and civilians.

It is true that one side loses more than another side, but when it comes to war there really is no real victor. While thousands of military lives are lost on both sides of the battlefield, understanding the gravity of a conflict can only be done by examining the civilians affected. Since the outbreak of the conflict in Yemen on March 27th, 1,585 innocent civilians have been killed and a least 3,605 civilians have been injured (PressTV). As of July 7th, this impoverished country has faced 105 days of conflict with no real end in sight. Sadly devastation of this caliber has remained a characteristic since the first man was killed by another’s hands.

When the rifles fall silent, the terror still follows soldiers as they begin to deal with the psychological ramifications of war commonly known as Post-Traumatic Stress Disorder (PTSD). This disorder manifests itself in people after they experience agonizing events. For people who suffer from PTSD, the amygdala, or the portion of the brain responsible for establishing emotion, learning, and memory, stores the problematic and often terrifying memory. Eventually, the memory is moved to the prefrontal cortex, and area tasked with judgment, making decisions, solving problems. As the immediate response to the memories, the fight or flight instinct becomes intertwined with response of the prefrontal cortex and the symptoms of PTSD uncontrollably manifest themselves (NIMH).

Common symptoms of Post-Traumatic Stress Disorder are categorized into three groups including re-experiencing memories, avoidance symptoms, and hyperarousal (NIMH). Re-experiencing memories include flashbacks of situations, nightmares, and frightening thoughts. Avoidance symptoms show through avoiding locations, feeling emotionally numb, depressed, and guilty, loss of enjoyment in activities, and the trouble of remembering the event. Hyperarousal refers being easily startled, constant agitation, difficulty sleeping, and angry outbursts (NIMH). Despite the fact that 1/3 soldiers who return from active duty suffer from PTSD, less than 40% seek help. On average 5 active-duty troops attempt suicide everyday (The Statistics). These shocking statistics address the psychological effects plaguing soldiers; while no accurate statistic can encompass the civilian population in regions such as Yemen, the percentage of PTSD is unimaginable.

There are a number of different options for treating PTSD however, there is no proven cure for the ailment. One option is trauma-focused cognitive-behavioral therapy which walks patients through the unpleasant situation with the attempt of ‘balancing’ memories to make them less traumatic. Family therapy, which includes the entire family, is used to facilitate family communication in an effort to help members empathize and understand with the issue the person is struggling with.

There is also medication such as Prozac or Zoloft that helps ease the emotional symptoms such as depression and insomnia. The last method of is Eye Movement Desensitization and Reprocessing (EMDR) which contains aspects of cognitive-behavior therapy harnessing eye movements and rhythmic stimulation to help the brain’s processing system (Smith). While there are multiple methods of treating for PTSD, general discourse around treating it focuses on military personnel returning home not the innocent civilians in combat zones with little to no accesses to treatment or resources.

As conflicts escalate it is easy to see how great the implications of war really are. The psychological neglect of people has untold consequences. In times of war, things as regular as simple airstrike has the power to instill fear and destroy the lives of innocent civilians on the ground. So long as fighting continues there will be little effort put into helping the victims of it. War affects everyone, and nobody ever truly wins. 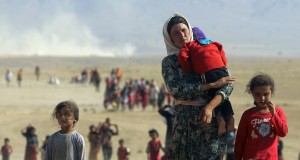 Considering Religion in the Refugee Crisis