After I attended a couple of thought provoking events, it dawned upon me that the world is going to change substantially in the coming years. First, I met up with the Young Professionals in Foreign Policy Human Rights Discussion Group to talk about the rights of prisoners and detainees, and we became engrossed on the issue of Guantanamo. The issue is that many of the prisoners in Guantanamo Bay are non-state actors, and there is no treaty out there to deal with this rising trend of non-state actors. We went back and forth about their inherent rights under the Universal Declaration of Human Rights versus the fact that many countries do not follow all of the provisions set forth in the Declaration. This is a failing of the international system, and begs the question about the use of the word “universal.”

One of the participants informed us that countries are allowed to execute non-state actors engaged in combat. Evidence of this conclusion comes from Article 5 of the third Geneva Convention where detainees from any conflict must be treated to the same standard as a prisoner of war, and they can be tried by a tribunal to determine if they are an unlawful combatant. The term “unlawful combatants” was defined by the United States in 2006, and was in line with the findings from the International Criminal Tribunal for the Former Yugoslavia. During the ICTFY it was determined that every person taken during war time fell into the category of POW or civilian, and if a civilian was taking part in combat then they were not obeying the law of war set forth by the Geneva Conventions. Although many states have abolished the death penalty, the precedent was set in the U.S. case Ex parte Quirin where eight German spies were determined to be unlawful combatants, tried in a military tribunal, and all of them were sentenced to death.

The Geneva Convention is a treaty created after World War II, and the parties involved wanted to agree upon terms for which wars should be fought. The Convention creates criteria for determining who is a prisoner of war: they must be “commanded by a person responsible for their subordinates,”[1] they must wear a uniform that is recognizable from a distance, they must open carry their weapons, and they must operate in “accordance with the laws and customs of war.”[2] The laws of war were created to negate unnecessary violence and destruction to civilians, soldiers, and property. If a state does not abide by these rules, then the responsible parties will be indicted and charged for human rights violations in an international court.

Then we thought, it might be time to create a multilateral treaty to confirm the rights of non-state actors. However, that idea was quickly discarded, because there would be no support for it. The main force that would make or break a treaty such as that would have to come from the United States, and it is more convenient for the US to operate in a legal gray area. The treaty would essentially outline the solutions to the problems found with Guantanamo Bay. How does one qualify to be in these prisons? How can someone be released from these prisons? Where do they go when they are released? What rights do they have before and during detention as well as before and during trial? What sort of system will they be tried under? These are serious questions that need to be answered, but it would be near to impossible to come to an agreement for all parties involved. As long as the US treats these civilians humanely, which has not always been the case, then there is no breach of current international law.

The next event that I attended was hosted by the Center for Strategic International Studies where Senator John McCain spoke about the defense priorities for this Congress. He said that there are international issues in the world today that we have not seen since the end of World War II, and some that we have never seen before. Russia is pushing geographic boundaries with the conflict in Ukraine and Crimea. China has been creating and claiming islands in disputed waters in the South China Sea, and building military bases on them[3]. These two factors combined with the threat from terrorist organizations, such as Daesh, are what Senator McCain was referring to.

I believe there will be a radical overhaul of the international system in the coming years, and there are two ways it could go. The first way is one where Russia and China become the dominant powers, and use it to figuratively push back the hands of time. Both Russia and China have been grabbing land within their reach as a test of the current international leaders’ willingness to intervene, and the international system as a whole. The instability in the world right now caused by non-state actors as well as aggressive states is very troubling. If China and Russia are the hegemonic forces in the international sphere, then the world will have to submit to their authoritative dictatorial styles.

The other option is one in which the United States takes charge, and stands up for the current liberal international system. The result of the latter would be a world where international institutions, such as the United Nations and the International Criminal Court, have a much larger role in the world with much more power. This sort of action would require the United States to ask for immunity from its violations in the previous system, and adopt the standards that the international community has already established, such as abolishing the death penalty. It seems that the world is coming to a point where the commitment of international leaders to the liberal ideology will be thoroughly tested, and the United States is at a crossroads. It can either be bullied by the rising world powers, or it can commit to the idea of liberal democracy that it claims to stand for. 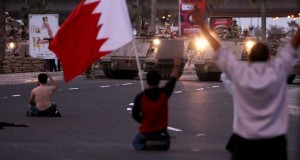