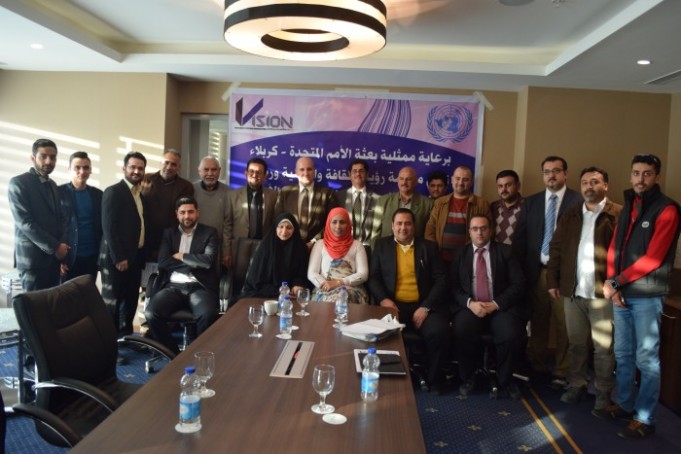 For the first time in the holy city of Karbala a workshop was done on the occasion of the International day of Mother Languages.

A workshop on the occasion of the International day of mother language was held in the Rahyana – Rotana hotel in Karbala, Iraq. This workshop was established by Vision Organization for Culture and Development and it was sponsored by the United Nations Mission in the city of Karbala under the project “Youth without limits 2015”. The organization hosted researcher Mr. Abdul-Zahra Agha of Hema Center for Studies, Dr. Ali Mohammed Yasin, a professor at the University of Karbala, the representative of the United Nations mission UNAMI in Karbala, Mr. Ali Kamona and a number of researchers and social activists. Guests were welcomed by Mr. Mohammed Hossam speaking on behalf of Visions Organization. Hossam talked about the aims and projects of Vision Organization in the coming period, especially the “Youth Without Limits ” project.

Mr. Ali Kamona, who considered this workshop as the first of its kind in Karbala city, continued to speak about the importance of the celebration of the international days and taking advantage of the intellectual and cultural activities, considering their significant impact on the community, and at the same time spreading the message of love and peace to every one, and he spoke about the origin of the event and how it was taken as an international day since 1999. Proceedingly, Mr. Abdul-Zahra Agha began his talk thanking  the organization for this hosting and its care about the Shabaki Language. Agha then mentioned the importance of real communication between the components of Iraq as a real project for a peaceful coexistence and saving the great heritage of the Iraqi nation. He also spoke about of the Shabaki language roots and some of the vocabularies of the language and how the emergence of some of their intellectual and educational schools. He expressed great fear  of the demise of the Shabaki language especially after the occupation of the ISIS terrorist groups to their home in Nineveh plain, which led to the displacement of the majority of their population and the other groups residing in that area.

Dr. Ali Mohamed Yassin of the University of Karbala criticized those who forgot to pay the enough attention to this occasion from the governmental agencies and the academic specialists to celebrate the Mother Language Day, and he talked about the importance of the Arabic language and the needs of today’s educational books in schools for a development simplified to mimic. The reality of the cultural and electronic invasion that our culture is witnessing these days, was also brought forth.

After that the discussions and questions in the workshop, civil activist Mohammed Maash of Visions Organization for Culture and Development confirmed that the organization will formulate the discussions of this workshop into recommendations to give to the Representation of the United Nations mission and stakeholders to encourage education to the society about the languages in all of Iraq, especially the Arabic and the Shabaki languages.

Iranian man to be charged with espionage in Yemen