The conditions of human rights within Bahrain continue to receive seemingly disproportionate attention within the media. From the view of human rights advocates, one could favor the growing attention that the al-Khawaja family has been receiving in terms of international recognition merited off of restless proponents of human rights groups advocating for an end to the corrupt al Khalifa regime. On the other hand, it is assumingly safe to say that the majority of the American population are unaware that Bahrain even exists, yet alone could place it on a map (which by the way is smack dab between Qatar and Saudi Arabia – hence, why Saudi is one of Bahrain’s greatest allies in helping to suppress their people).

Contending that Bahrain lacks appropriate recognition in terms of international intervention, scores of innocent people continue to remain oppressed with many being tortured and murdered on a daily basis on a bias of differentiating faith, as was the unfortunate fate of Hasan Majeed al-Shaikh, one of hundreds who have suffered a brutal death due to excessive torture within Bahraini prisons since the 2011 uprisings (ADHRB).

Regardless of the dozens of human rights advocacy organizations who continue to document cases of arbitrary violence inflicted upon the citizens of Bahrain, particularly that of the Shia Muslim majority, international recognition has ceased to halt the regimes corrupt rule as the world’s leading power, the United States has continuously advocated their dismissal of the issues contended in their absence of publicly demanding that Bahrain halt these violations, as has historically been the case in many instances of countries whom are not their allies, such as the continual public denunciation of the Assad regime within Syria.

It is due to this notion that many would thus contend America’s actions, or rather lack thereof, to be a silent dismissal of the violations that their allies deliberately inflict upon their citizens. It is also therefore favorably thought that this dismissal is derived in the valuable commodities America’s allies offer them, such as oil (Saudi Arabia) and a station for their navy’s fifth fleet (Bahrain). However, the issues of condemning countries who violate human rights is more complex than just asking them to stop. Against popular belief, it is in fact true that all of our government are not absent minded. Although skeptics may disagree, there is likely a method to their madness (at least, some of the time).

Such a method could thought to be derived in protecting the valued lifestyles of the middle class and upper elites within American society. And although haters will hate, this is not achievable without maintaining good relations with their allies, which is likely more difficult than we credit them. Now, before the many spectators assume I am against the notion that a just and prosperous world may flourish off of better run politics, let me intervene that I am not completely crushing this argument. In fact, it very well may be plausible that one’s argument could have a favorable outcome. However, it is also more plausible that this is unrealistic and is likely rooted in a utopia that does not and will never exist, at least within American society, as politics are seemingly more complex than we wish them to be.

It is also true that one only need look at a Bahrain human rights report (such as that of Shia Rights Watch 2014 Bahrain Report) to realize the mass atrocities that continue to occur within the nation’s borders and advocate the need for change. However, within a society that is unaware that the nation of Bahrain even exists, it is difficult for the many grass root human rights advocates to spread recognition of a masked issue in order to promote change on a global scale. It is also difficult to stop an issue in which is not prevalent within just one society. In fact, it should be recognized that numerous researchers have signified the root cause of all atrocities to be entrenched in socioeconomic issues (as best characterized in Paul Tough’s book How Children Succeed: Grit, Curiosity and the Power of Character- which by the way, you should read).

Thus, although it is acknowledged that we do in fact (for the most part) agree on what is causing these barbarities, it is now a matter of figuring out how to promote socioeconomic change on a widespread level. And that my friends, is where nobody can seem to agree. And many, even our top philosophers, economists, sociologist, peace advocates and religious leaders, continuously scratch their heads, unsure of how to endorse this ultimate goal.

Thus, as is the case with Bahrain, international recognition and intervention need be had. However, this is extremely difficult when the majority of American citizens do in fact value their Kim Kardashian television show over a documentary portraying the life of an individual being tortured ceaselessly (as in the Abu Ghraib documentary: Ghosts of Abu Ghraib, in which most Americans are unaware even exists). It is in fact due to this notion that any hope of enforcing international recognition of inherent human rights (as stated within the UDHR) is ill-fated. Thus creating a mass dispute in American politics regarding the refusal of the majority of Americans to recognize their role in politics as being the voice of the people- pointing back to my argument of a change in politics being an unachievable utopia.

It is one thing to advocate change and an entirely different concept to promote it.

And it is this challenging concept that is the unfortunate reality of not only Bahrain, but also of American politics, and really, society as a general whole. 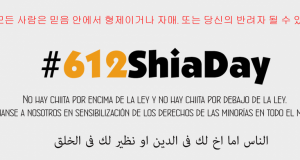